There have been plentiful written and spoken words about peace in the Middle Eastern Region. Numerous opinions are given and after almost a century of war and conflicts in this area, a justified era of peace is looking further than ever. Oil interests and coherent political interests play a major role in and obstruct, until this day, the path to a solution in this situation. Nevertheless, it seems that justified peace in the geographic Middle Eastern region is a possible scenario, but the political will to chart its course towards it must be present.

The Three Nations Solution can be a solution for two of the problematic regions in the Middle East. 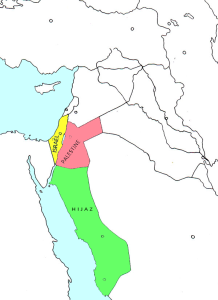 HIJAZ, ISRAEL, PALESTINE
For the Palestine concerns, the Three Nations Solution offers a way forward towards justified peace in this enduring conflict. For example, in 1916 and 1917, Israel, Palestine and the Hashemite kingdom Hijaz were liberated, after centuries of occupation by the Turkish overrulers. In 1926, the Hashemite kingdom Hijaz was reoccupied by Saoedi Arabia. Emir Faisal was therefore assigned Palestine, the current kingdom of Jordan. He encouraged the population of this region to settle in the region now known as Israel.

For justified peace to be established in this region, the Hashemite kingdom of Hijaz must be returned to the current king Abdullah II (of Jordan) by King Abdullah bin Abdul Aziz al-Saud (of Saudi Arabia). In turn, king Adbullah II, must return the current kingdom of Jordan to the Palestines. The Palestines, in their turn, shall return to Israel, the regions occupied by them, like the West Bank, Gaza Strip and Eastern Jerusalem. All Palestines can, by completion of this exchange, return to their own land of Palestine. Here they will be able to build new cities and live in peace, with the aid of the West and the surrounding wealthy Arab countries. 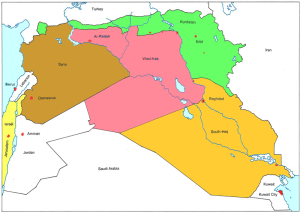 Iraq and Syria
Extreme violence and almost daily bombings in Iraq and in Syria is degrading. There are regrettable for over 200,000 deaths. More than 2 million people to flee this inhuman violence perpetrated by extremists arising from the extreme Salafism and Wahhabism. By dividing the two countries in three separate areas, the opportunity is given to the three different populations, in order to put an end to this diabolical violence by the extremists.
Southern Iraq, with Baghdad as its capital, is intended for the Shiites. They are the largest population group (60%) in Iraq. Other major cities in this area are Samarra, Karbala, Basra and Najaf.
Western Iraq and northeastern Syria, with its capital in Ar-Raqqah, is intended for the Sunnis. In Iraq, they form a significant minority of 20%. In Syria, they are the majority. Especially this population group has an unprecedented number of extremist groups such as Al-Qaeda and IS. If they like a normal country would be recognized, must sunni- political leaders and the military leadership (formed from the former armies of Iraq and Syria) provide a safe habitat for the population, and they will have the extremists in their midst hard approaches. This senseless extreme violence really needs to be. Other major cities in this area Tikrit, Mosul and Tal-Afar.
Northeastern Iraq and Syria, with its capital Erbil is for the Kurds. They are 20% a significant minority in Iraq, and Syria. Other major cities in this area are Kirkuk, Sinjar and Kobane.
Western Syria to the Euphrates River, with the capital, Damascus, is for the Alawites (they constitute 10% a minority in Syria), Christians, Druze and other minorities. Other major cities in this area are Hamah, Homs, Latakia, Aleppo, Idlib, Palmyra and As-Suwayda.
For all these groups should be that they must stop the violence immediately and together must agree on the boundaries of their future independent countries, and for a lasting peace in this part of the world. With income from selling oil all populations can build their independent countries and realize a peaceful region here. They can follow a gradual path of negotiations with the various groups to strengthen democracy, to prevent extremists in their area take over power. 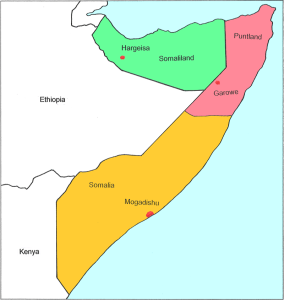 Somalia
In Somalia, there has long civil war between the different communities, with many deaths, injuries and refugees as a result. On May 18,1991, in the northern Somaliland with its capital Hargeysa (with about 3.5 million inhabitants) declared its independence. Followed in 1998 by Puntland with its capital Garoowe (with about 3.9 million inhabitants). Both independent states has long dominated the relative peace and stability. Only the border between the two countries is disputed by Puntland. However, both states are not recognized by other countries in the world. In the rest of Somalia with its capital Mogadishu (with about 3 million inhabitants), it is still very restless. Among the various warlords, there is still a battle going on.
Somaliland and Puntland have been for a long time two independent states, it is quiet and stable. The international community should reward both countries for this purpose by also recognizing them as independent sovereign states.
The different population groups and the various warlords in the rest of Somalia will have to come through a negotiated peaceful solution to their various conflicts. Ultimately this should lead to a peaceful- and stable region. 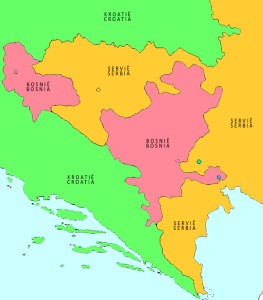 Bosnia and Herzegovina
For this country too, the Three Nations Solution can bring justified peace closer. This region is currently still a ticking timebomb, set to explode at any given moment. The three ethnic groups, Croations, Serbs and Muslims, are forced (by the Western Coalition) to coexist in one region. A separation of this area into three sovereign regions, can prevent the ignition into yet another civil war between the ethnic groups. After all that has happened since the last civil war, this separation shall bring more stable and harmonious situation by divide the region into three areas for its respective ethnic groups now coexisting forcefully. The area where the Serbs are settled in Bosnia-Herzegovina is to be added to Serbia. The area where the Croatians are settled shall be added to Croatia and last, the area where the Muslims are settled, shall become the independent and sovereign Republic of Bosnia. 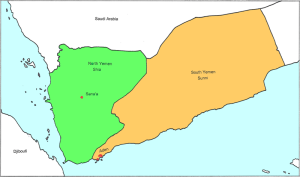 Yemen
In Yemen, unfortunately there is also a civil war. This moment now Yemen is divided into three parts (Sunni, Shia and IS/Al-Qaeda). For the people in Yemen it would be better to separate Yemen in two States. North-Yemen for the Shia people, and South-Yemen for the Sunni people), so they can continue to live in peace together. The International community should be fixed borders between the both countries for a final peace plan, of course which the Shia people and the Sunni people have to agree. When this is done, they can fight against the terrorist groups in both countries and combated and of course should be removed completely with the help of the International Coalition. Above there is an example attached to the borders of both new countries, North-Yemen and South-Yemen. 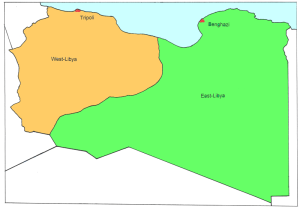 Libya
In Libya, there is a civil war with many deaths, injuries and refugees. Many thousands of refugees have already drowned in the Mediterranean Sea in their attempt to get into the safe Europe. Therefore, a division between the two main population groups will also be an opportunity to put an end to this war. In eastern Libya, with its capital in Benghazi are also extremists IS operates in several cities. In western Libya capital Tripoli, more parties compete against each other also include IS. When Libya is divided into two independent countries, they (each separately), focus on fighting these extremist groups, so that a peaceful solution here, and the road to democracy through negotiations between the various population groups will be realized. Again, both independent countries, that there is sufficient oil revenues to rebuild both countries and also to realize a peaceful- and stable region here.

The Three Nations Solution could bring the long desired justified peace to these tormented regions, but the political willingness is and shall remain the indispensable and essential factor.

Religion is meant to honor God and worship, it is no excuse for abuse, torture and murder.
Roland Masmeijer

You shall have no other Gods before me.

You shall not make for yourself an idol in the form of anything in heaven above, or on the earth beneath, or in the waters below. You shall not bow down to them or worship them; for I, the Lord your God, am e jealous God, punishing the children for the sin of the fathers to the third and fourth generation of those who hate me, but showing love to a thousand generations of those who love me and keep my commandments.

You shall not misuse the name of the Lord your God, for the Lord will not hold anyone quitless who misuses his name.

Remember the Sabbath day by keeping it holy, Six days you shall Labor and do all your work, but the seventh day is a Sabbath to the Lord your God. On it you shall not do any work, neither you, nor your son, or your daughter, nor your manservant or maidservant, nor your animals, not the alien within your gates. For in six days the Lord made the heavens and the earth, the sea, and all that is in them, but he rested on the seventh day. Therefore the Lord blessed the Sabbath day and made it holy.

Honor your father and your mother, so that you may live long in the land the Lord your God is giving you.

You shall not murder.

You shall not commit adultery.

You shall not steal.

You shall not give false testimony against your neighbour.

Our Father in heaven,
Hallowed be your name,
Your Kingdom come,
Your will be done
on earth as it is in heaven.
Give us today our daily bread.
Forgive us our debts,
as we also have forgiven our debtors.
And lead us not into temptation,
but deliver us from the evil one.
Because yours is the kingdom,
and the power, and the glory,
forever.